Ode to My Pressure Cooker 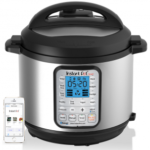 o confess, when I first heard people raving about pressure cookers, I thought, no way.  I’m not having an exploding appliance in MY kitchen.  But I did some research.  And I found that the new models are much different than the ones from my grandmother’s day.  They don’t explode!  While I have a stove top set, I find it’s the electric model that I seem to use most days.  In fact, if I were starting to outfit a kitchen from scratch, I probably wouldn’t bother with the stove top unit.

I originally thought I’d use the pressure cooker to make beans.  Beans in a can just don’t compare to those made from scratch, but beans can take 2 hours on the stove. Who has time to babysit anything cooking these days?.  With the PC, I can just fill it, set it, and leave it.  It brings the unit up to pressure, counts down the specified amount of time, and then switches to ‘keep warm’ setting when it’s done.  No need for me to hover over it, and I can even it set it and walk out the door.

What I didn’t expect, was that I would start using the PC for cooking rice and other grains.  You see, I have a rice cooker,  and it makes perfectly good rice. But the rice cooker takes 2 hours for brown rice, and the PC only needs 30 minutes.  And cleanup is easier with the PC than the rice cooker, another plus! Also, the PC is happy with quinoa, millet and oats, while the rice cooker manual suggests sticking to rice.

Soup is another area where the pressure cooker shines.  It has a few different settings so that I  can saute onions first, then add in everything else, and soup is ready in less than an hour.  Mine has a stainless steel pot, which means I can just stick in an immersion blender if I want a creamier consistency for the soup (helpful for getting little ones to eat more veggies!).