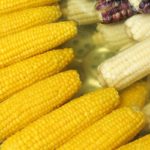 File this one under ridiculously easy.

If it’s not too hot in the house, roast the corn in it’s husk at 350 degrees for 30 minutes. The corn steams in it’s husk this way and tastes incredible.

We were having a heat wave here in NY, and I had fresh corn from the farmers’ market.  I didn’t want to heat up the kitchen, and we don’t have a BBQ grill (another option for cooking corn) so I decided to ask the farmer what I could do with it. Here are some suggestions:

My farmer asked if I had ever eaten the corn raw? He then pulled out an ear, took off the husk and gave it to me. It was delicious! I had never thought to eat the corn just raw.  It can be eaten straight from the cob or carved off and tossed in a salad.

The farmer also suggested boiling the corn in water for 2-3 minutes.

So, three easy methods (4 if you count the BBQ) for corn.